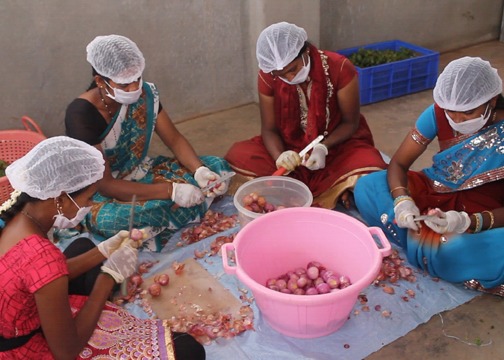 A technology developed in Bengaluru in the early 1990s at the Indian Institute of Science (IISc) has finally borne fruit to provide farmers in drought-hit areas hope to boost their incomes despite the adversities.

In a laboratory-to-land success story that took well over two decades to achieve fruition, the fruit/vegetable drying technology developed by IISc’s Centre for Sustainable Technologies (CST) has helped a 12-woman-strong self-help group in Aralaguppe (in Tiptur taluk of Tumakuru district) to fill space on the shelves of Bengaluru’s Metro Cash & Carry. They can now earn five times the original value of dried produce.

This has spurred efforts to take the technology to drought-hit areas where farming communities hit by crop failures can apply the technology, value-add and sell the produce at many times the original value.

A non-government organisation, Technology Informatics Design Endeavour (TIDE), working closely with CST, has proposed implementing technology-driven enterprises in Gadag which is reeling under drought conditions, and is looking for funding from the department of science & technology.

Nutritional experiments proved that the dried form of the produce did retain the nutritional value as well as the flavour and could be preserved with a shelf-life ranging between six and nine months.

The drying process was carried out using biomass dryers that were specially designed for the purpose by a team of CST scientists led by now-octogenarian Prof A Lokrus. While the drying process was mastered way back in 1990, Somashekar said marketing the technology for the benefit of the rural masses proved a huge challenge. “We did not know how to market the technology without public support,” he said.

The technology did prove to be a success in and around Sirsi in Uttara Kannada district – where the biomass dryers are being manufactured by an engineering firm Joshi & Co – and on the outskirts of Bengaluru, beyond Peenya where another engineering company, Zigma, is manufacturing the dryers. It was, however, largely neglected in the rest of the state.

The objective was to implement the technology in times of glut or drought when the farming communities could themselves use this technology to preserve their produce and sell them in powdered or value-added form.

In times of drought, the farmers can dry the produce and value add it five-fold by making ready-to-boil-and-eat preparations and sell them directly to large retail stores for higher earnings.

In both cases, the technology eliminated wastage of produce.

However, TIDE was finally able to take the technology forward. In collaboration with CST, it carried out a series of awareness programmes about the technology’s benefits to farmers. And finally, in 2014, it was able to help establish a women’s self-help group, Manini, in Aralaguppe.

TIDE executive director, K Sumathy, told Bangalore Mirror, “Our earliest success [2012] was in drying fish in Kerala where the women continue to profit from the enterprises set up with the help of TIDE there.”

She said, at present, TIDE has helped Manini develop drying protocols for onions, tomatoes (both of which can grow in drought conditions), garlic, dried grated carrot, mint and chillies, which are sold in Metro Cash & Carry in Bengaluru. All the profits go to the self-help group. The efforts were supported by corporate social responsibility initiative of Manipal Foundation and Fanuc India.

Select the fields to be shown. Others will be hidden. Drag and drop to rearrange the order.
Click outside to hide the compare bar
Compare