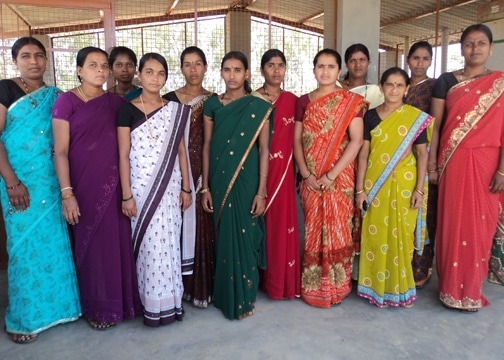 Through various projects supported by national and international agencies and Government departments, TIDE has been working on promoting drying enterprises among rural women, for produce that are locally available. Our earliest success was in drying fish in Kerala where the women continue to profit from the enterprises set up with the help of TIDE.

Applying the same technology to horticultural products, TIDE had developed protocols for drying onion and garlic. These two products were chosen after a market survey funded by NABARD showed potential demand for them. A biomass dryer was set up at our Women’s Technology Park (WTP) at Aralaguppe and training manuals were developed. A group of rural women were trained under the WTP project funded by Department of Science & Technology (DST) and were initiated into production of dried onion and garlic.

Supported by NABARD to take it to commercial level, TIDE nurtured this group of women to form a SHG and undertake production on a commercial scale. To enable this, TIDE facilitated package development, obtaining food certification (FSSAI) for the products, and other commercial requirements like PAN, TIN and bar coding.

MANINI started commercial operations in 2015 and has since expanded its product portfolio to Onion, Garlic, Tomatoes, Chillies, Carrot, Mint, Drumstick leaves. The products have been well accepted in the markets and are sold in large establishments like METRO CASH & CARRY and BIGBASKET online platform. MANINI also enjoys CSR support as it is a successful case study of women empowerment through technology.

MANINI is run by Self Help Group of women from Aralaguppe, in Tiptur taluk in Tumkur district in Karnataka (130 km from Bangalore). It is registered as an enterprise, has food certificate and necessary legal documents including a bank account.
TIDE and MANINI have a MoU where in TIDE provides hand holding support for MANINI including infrastructure, technical and marketing support through funded projects. All the income goes to MANINI.

MANINI has demonstrated that technology based rurally produced products command a premium urban market and such an enterprise can be run by SHG. And it has shown value addition for local produce and also given a solution to local farmers during excess supply times to cut down their losses.

With the success of MANINI, TIDE is working on creating a Hub and Spoke Model by creating more spokes with MANINI being the hub for quality control and marketing.

TIDE also is considering incubating more technology based enterprises and use MANINI as a marketing brand for the produce made by them.

This site uses Akismet to reduce spam. Learn how your comment data is processed.

Select the fields to be shown. Others will be hidden. Drag and drop to rearrange the order.
Click outside to hide the compare bar
Compare